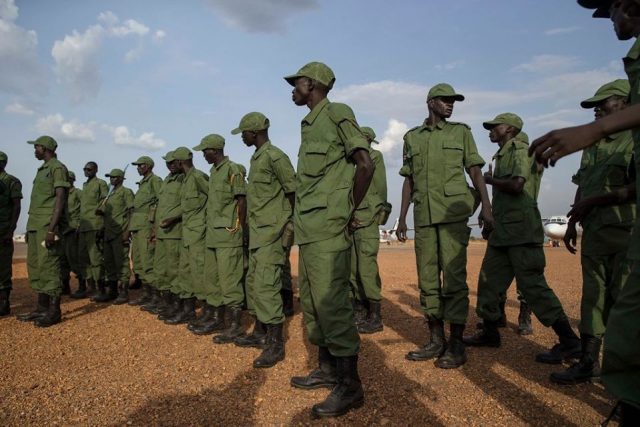 The JMCC is a joint security mechanism responsible for oversight and coordination of forces in cantonment and barracks.

He said other forces are expected to move from Loyoro, Lowareng and Achwa cantonments sites within less than a week.

Abelle urged the forces to respect the high command if they are to succeed in training to achieve their goals.

“If people arrive at the training field, there should be no tribalism there. You should not hate your brother and there will be only one channel for communication to avoid misunderstandings,” he said.

“There are forces coming from Kapoeta State, including SSPDF [South Sudan People’s Defense Forces]. They would have joined and we address them together, but they are still on the way because of transport challenges,” he said.

Oromo urged the forces to maintain discipline and shun tribalism.

The SPLA-IO deputy sector 9 commander in the area, Maj. Gen. Benjamin John Batista urged the forces to cooperate during the training.

He said the training will help in the reunification of all the forces.

Meanwhile, Bibiana Kandido, a member of the state legislative assembly, urged both forces to forget about the past and start a new chapter.

She thanked the opposition forces for respecting the ceasefire ever since the signing of the revitalized peace accord in September 2018.

The preparations to train the unified forces came one month after the national government allocated $16.5 million for the security mechanisms to speed up the creation of unified forces.

The process of gathering fighters into military training camps with a view to forming a unified army is a cornerstone of the 2018 peace deal.

This article was originally published on Radio Tamazuj

We need your support so we can keep delivering quality journalism that’s open and independent. Talk of Juba’s editorial independence means that: 1) We can continue to provide factual and unbiased news about political developments in South Sudan. 2) Inform and educate people on how to avoid outbreaks of infectious diseases. Your donation helps 1) Encourage accountability and transparency in the government so that it better meets the needs of those it aims to serve. 2) Amplify the voices of those living through crises. 3) Provide a platform for local journalists and citizen journalists in South Sudan where freedom of the press is suppressed. 4) Recognise the value of investigative, innovative, fact-based reporting that is independent of vested interests AND. 5) Build a community of people who believe in quality journalism.

© 2020 Talk of Juba Media Ltd. All Rights Reserved.
We use cookies to ensure that we give you the best experience on our website. If you continue to use this site we will assume that you are happy with it.OkPrivacy policy