Kalisto Lado Faustino, the controversial former mayor of Juba City Council, has refused to hand over the Facebook page “Office of the Mayor – JCC” and has instead renamed it “JCC-Former Mayor Kalisto Lado.” 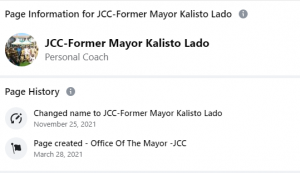 The Facebook Page, which was created on March 28, 2021, has over 13,000 followers and a high interaction rate.
Members of the public, particularly on Facebook, believe it would have been preferable if the former Juba City Mayor had given over the social media account to his successor for the purpose of publicizing their work.

“Maybe because he struggled for it, they also refused him a speech during the welcoming of the new mayor,”thinks a commentator.

“Lack of information management. All official pages are supposed to be managed by the directorate of media,” says another.

Michael Lado Thomas Alla-Jabu, the new Juba City Mayor, was sworn in and welcomed at the Juba City Council headquarters yesterday, in an occasion attended by Kalisto Lado, who came without being invited. As the outgoing mayor, he was also denied the opportunity to give a speech.