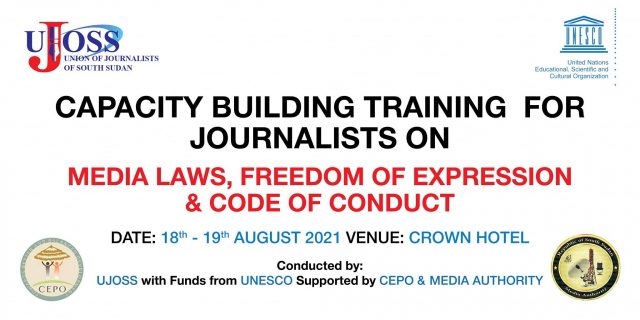 The country representative for United Nations Education, Scientific and Cultural Organization (UNESCO) Mr. Julius Banda has urged journalists to be sensitive when reporting on tribal issues to avoid falling in the pitfalls of inflaming violence instead of being drivers of peace and development. He made the remarks yesterday  during the opening of a two day training for 25 journalists at Crown Hotel in Juba organized by the Union of Journalists of South Sudan (UJOSS) with funding from UNESCO and supported by Community Empowerment for Progress Organization (CEPO) and The National Media Authority  on Media laws, Freedom of Expression and code of conduct.

“As journalists, you must be aware of the environment in which you operate to avoid a repeat of the Rwandan Genocide situation where the media played an important role in fueling it”, he said.

Mr. Banda added that journalists should use their freedom of speech to drive development by reporting more on public interest issues like climate change, health, water and education instead of focusing only on hard news.

On his part, the Director General of the Media Authority Sapana Abui urged the journalists to know and understand our media laws which he emphasized are the best in the region, citing an example of the access to information law.

“Knowing the media laws and code of conduct will help you to operate within the law and knowing your rights where necessary”, Abui said.

He concluded by thanking UJOSS for organizing the training stressing that it is the only way our journalists can learn  about the laws because learning is endless.

Most of the participants expresses their gratitude and say that this training is long overdue and it will go a long way in empowering them.