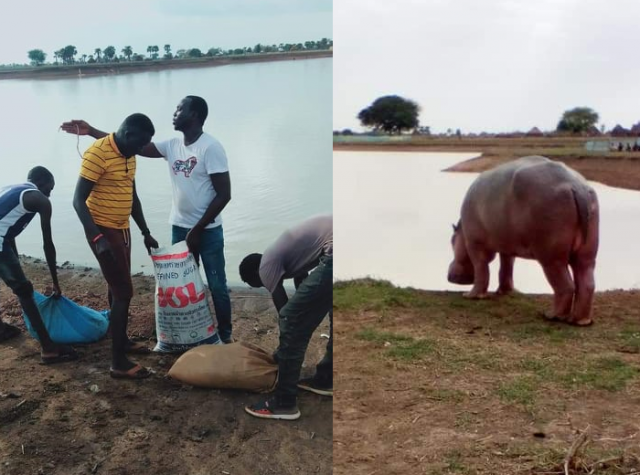 A concerned citizen by the name Mawien Garang is the new conservation champion after he spearheaded an online initiative dubbed #RescueTheKingOfTheWater in a bit to help feed the starving hippos at Awulic village in Northern Bahr El Ghazal State.

Mr. Garang took to his Facebook page on Sunday to thank and appreciate every well-wisher who raised an alarm about saving the two hippos from the catastrophic drought at Awulic village.

Garang revealed that with the help of another well-wisher, John Bol Angok Bol, they bought seven bags of ‘residue’ and a group of motor cyclists in Aweil town helped in delivering the bio product to the site for the two stranded hippos.

It is suspected that one hippo out of the three that were in the pond must have succumbed to hunger and veterinary related diseases and the carcasses of the hippo are still lying at bank of the seasonal pond.

Delayed rainfall in Northern Bahr El Ghazal is main reason why the pond they were living in dried up and the remaining little water have become stagnant making it hard for the animals to survive.

Former Aweil youth chairman, Kuot Kuot Awou took charge of the fundraiser and it is reported that many of the youths in the area contributed greatly to the success of the noble initiative.

On the flip side of things, The Ministry of Wildlife Conservation and Tourism and the South Sudan Wildlife have not showed any concern so far on the plight of the hippos.

This is an issue that has raised eye brows amongst concerned citizens since it is expected that the two government institutions should be on the forefront to handle such matters.

Mr. Garang has called out to the state’s Wildlife and Games Conservation Department to join in the #RescueTheKingOfWatersCampaign to help relocate the hippos. 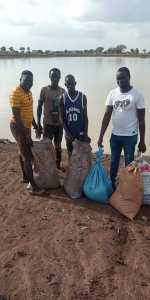