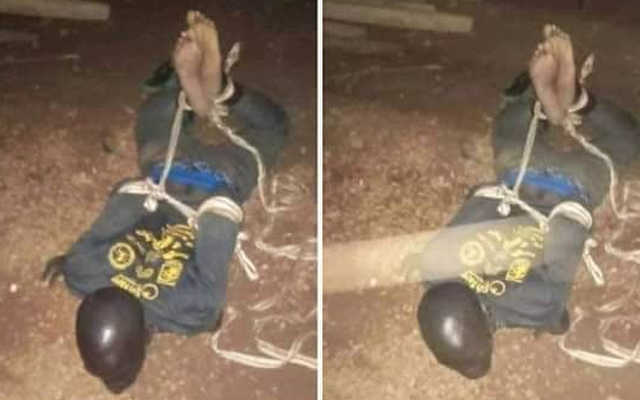 A photo of a young man forcefully tied up and mercilessly being tortured by people who are alleged to be policemen has caused outrage online amongst South Sudanese citizens online.

One of the sources identified the young man as Deng William Ajal claiming that he is an innocent retail shop owner hailing from Aweil town who is being suspected of being a plumpy nut dealer.

Another Facebook account user revealed that he is the son of a re-known liberator Molana Wiliam Ajal Deng; who is said to have played a major role in South Sudan’s freedom struggle.
Many have termed the act as an inhuman, crying foul that police brutality must stop by all means and that the police who were involved in the act should be persecuted.

Despite undergoing a number of human rights training courtesy of United Nations Mission in South Sudan (UNMISS) to improve on their investigative skills and to understand better human rights laws and principles, South Sudanese police officers are still blamed for various human rights violations by civil society organisations in the country.

Recently, the police force in Torit underwent human rights training by UNMISS, the police officers were informed that torture and other forms of inhumane treatment of law offenders was unacceptable and unlawful. Despite these efforts to reform the police force incidents about police brutality are still being experienced in South Sudan.

RELATED:  Kiir reconstitutes the Council of States
MOST READ