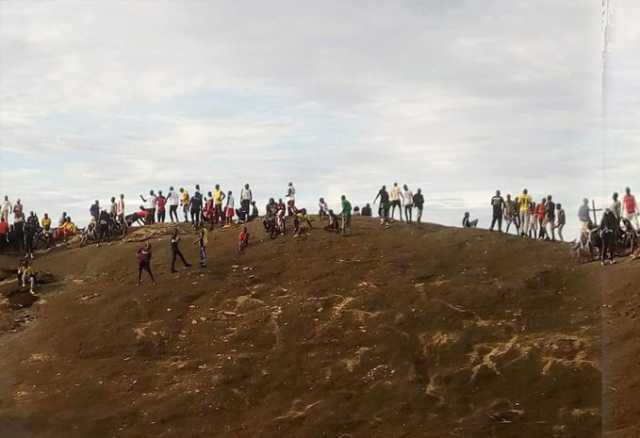 With the lockdown imposed in Juba due to Coronavirus pandemic, many young South Sudanese who are now idle at their homes have found a new way of killing the boredom in hiking Jebel Kujur.

In the past few weeks, the Kujur Mountain or rather Jebel Kujur in Juba has seen an unusual increase in the number of hikers on daily basis. Even though there are few other hills and mountains around Juba, Jebel Kujur is the only destination for Juba hikers. They come from as far as Shirkat leaving many hills in the area. Usually most hikers don’t own the recommended hiking gears and clothings as seen in pictures on social media. The hiking expeditions are organized mainly on Facebook and Twitter.

They meet at an agreed time and points before they climb in groups. They wake up as early as 4:00 in the morning to beat the scorching hot Juba’s sun and day’s heat to climb Jebel Kujur and return at midday. What follows is the flooding of social media with pictures of the expedition. This prompted a viral debate this week because this is surely a trend for South Sudanese people. A section of social media users have pointed out dangers these unguided hikers face while others applause it as a healthy exercise.

But the new craze could be shortlived as expert warn of dangers hikers are exposed to while reaching to the top of Jebel Kujur. Deng Akol, a mine expert working with an international NGO which provides humanitarian mine clearance, EOD (Explosive Ordnance Disposal), emergency medical aid and disaster relief to people living in postwar countries told Talk of Juba that these young people are vulnerable to Explosive Remnants of War (ERW) hazards. “These young people don’t know the dangers, they’re putting themselves to,” he told Talk of Juba on Monday. “During the Sudanese Civil War, the mountain was used as a defensive front by the Sudanese Armed Forces (SAF) to deter and stop the SPLA’s advance on Juba. The areas around the foot of the hill were therefore planted with landmines and other anti-personnel ground explosives,” he continued.

According Deng Akol, the demining process by humanitarian agencies which started in 2006 across South Sudan has not cleared all the landmines and other war explosives and that’s why some areas are currently being revisited for demining. Jebel Kujur and various other mountains across the country are some of the places that have remained not defined.

In 2018 an explosion incident at Jebel Dinka area claimed lives. While similar incidents where Explosive Remnants of War (ERW) have exploded and injured or claimed lives are common in the country. Deng advises the new hikers to always watch out for both Unexploded Ordnance (UXO) and Abandoned Explosive Ordnance (AXO) and to never pick up any metals they find atop the hill as they could be explosives. According to health experts, the hikers are also at high risk of contracting Coronavirus as they don’t observe social distancing when taking selfies while at the top of the hill. Talk of Juba sought a comment from one of the hikers on the dangers they could possibly be putting themselves into while climbing the hill. The hiker debunked the claim of dangers on Jebel Kujur.

“I don’t think there are any dangers. Hiking is part of keeping ourselves healthy. The routes we use to climb up to the top are quite safe and clear if at all there were landmines planted on the mountain,” he said adding that people who are against their hiking expeditions are just older people terming them “enemies of progress”.

This week one of the hikers shared on social media a picture of a venomous cobra and claimed he took the picture of the deadly snake while he was climbing the hill. If true, this could be another danger that the hikers are exposed to as the hill could be inhabited by deadly snakes. The hill has been left explored except for the local women who break rocks into gravel at the foot of the hill and sell them for use in construction works.

In recent years, the mountain has been used as a prayer sanctuary by the self-proclaimed South Sudanese prophet Abraham Chol. He has erected a giant white cross on highest peak of the hill. He is said to visit his prayer sanctuary on the hill top every week with sick members of his church where he allegedly pray for them and performs miracles to heal them. Jebel Kujur commonly referred by it’s Arabic name is the hill situated west of Juba and it is the nearest of the hills in the vicinity of Juba city. Jebel is an Arabic for mountain while ‘Kujur’ is a Juba Arabic word which loosely translates to witchcraft. It’s not clear how the hill got its name.

ABOUT US
Talk of Juba is a progressive, youth-oriented news organization based in Juba, South Sudan.